I fell out of security for a while, felt too dumb for it. Now I’m crawling out of my hole and getting back to it.

Some things I have done recently: I started working in my university’s IT department as a student assistant. Way better than working in food service. I am working towards finishing my Google IT cert, hard to find time for it when you are taking 6 classes already.

I recently (like 30 minutes ago) joined the ACM, the Association for Computing Machinery. Lots of great resources there to utilize.

Later this year I plan on attending the Pacific Hackers Conference, hosted at Hacker Dojo in Santa Clara. Looking forward to it!

Although I was not aware of the warehouse until a few months ago, it will forever hold a special place in my heart. One of my fondest memories of the warehouse was buying a broken laptop for $15 and being able to repair it myself with parts bought from Central Computers. I remember walking around the many aisles and seeing journals and magazines that were published before I was born.

Here are pictures that I took on my last Weirdstuff trip back in January:

The entrance to Weirdstuff Warehouse.

Relatively new computers that were for sale. 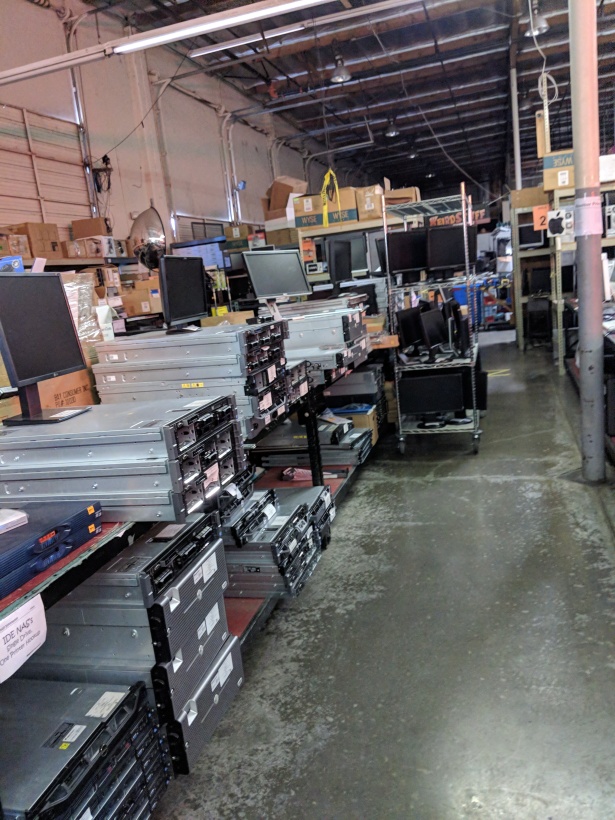 More monitors and other things for sale. On the right hand side you see the Apple logo, which is where Weirdstuff put all the Apple products for sale.

A whole bunch of hard drives!

Laptops and other things for sale. 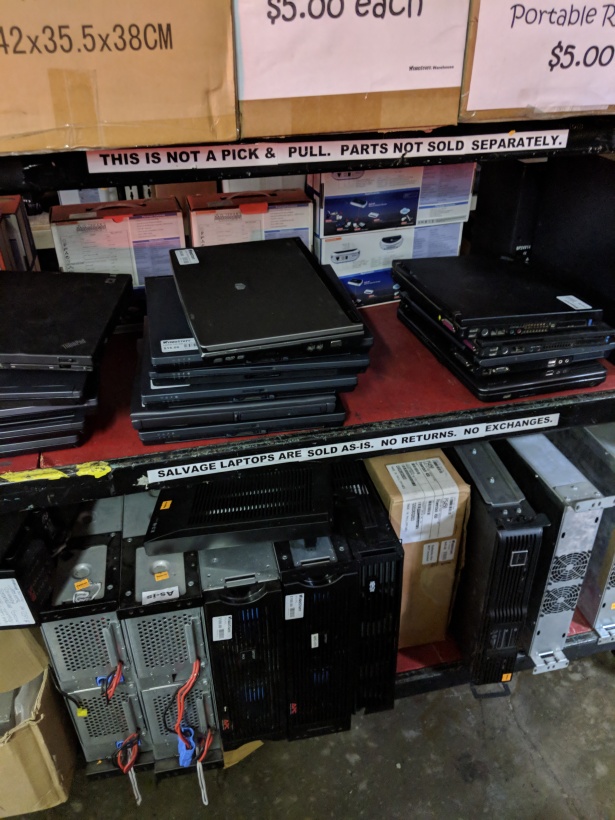 More laptops for sale! Most of these seem to be old business laptops with the RAM and hard drive removed. 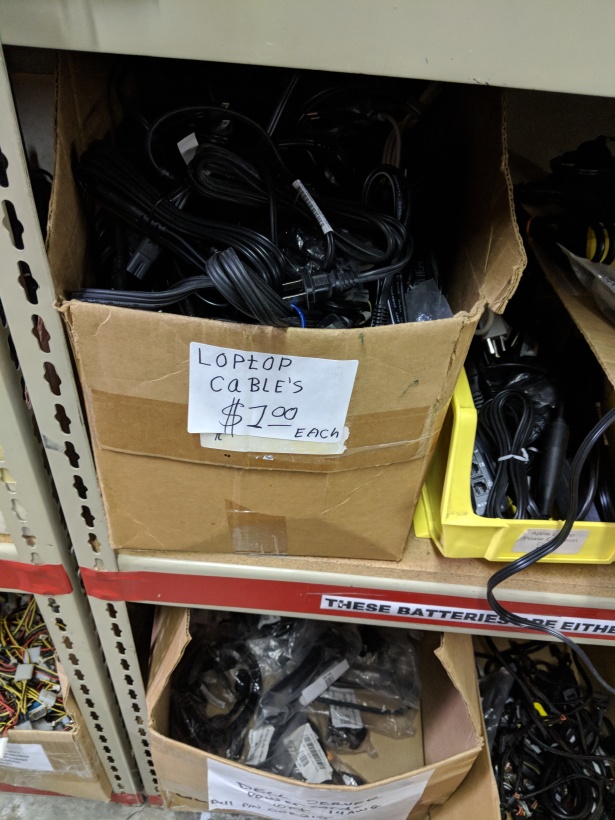 A various array of laptop cables, sold for $1 each.

Some old VHS tapes! I remember watching VHS movies as a child and having to rewind them.

If I recall correctly, this was in the Apple section. I’m not too familiar with Apple computers, so I am not sure what model or year this monitor was.

Another picture of the Apple stuff that was for sale.

WordPerfect is a word processing application that predates Microsoft Word. 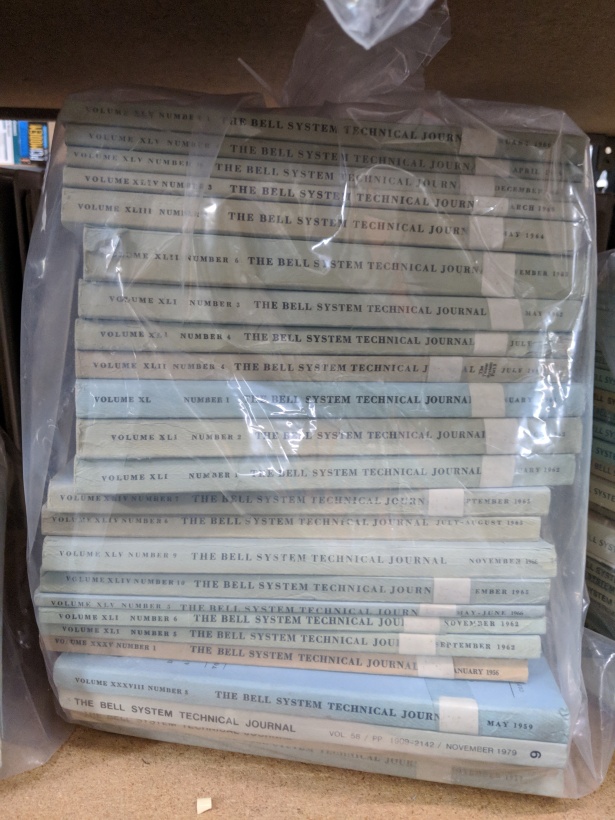 These journals are much older! It’s a little hard to tell from the picture but it looks like these were published in the 60s. The Bell System Technical Journals were published from 1922 to 1983, when Bell Systems underwent restructuring (as a result of the United States v. AT&T case). 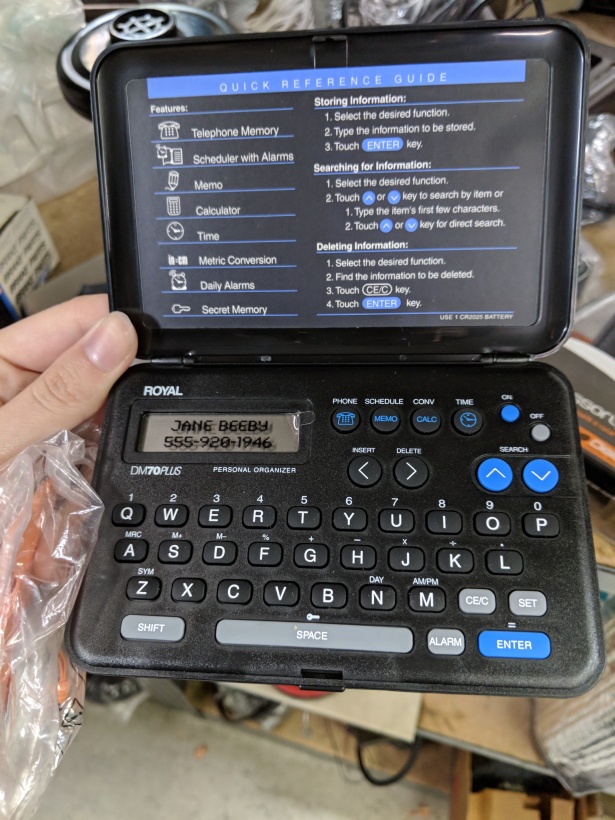 I believe that this is some sort of PDA organizer, used way back when smartphones weren’t in existence. It’s almost difficult to imagine a time where people didn’t have smartphones; it’s become so commonplace to have one now.

RIP Weirdstuff Warehouse, you will be missed!

I haven’t posted here in a while! I have been busy with school – had two math midterms two weeks apart! Fun!

I recently picked up a copy of Practical Cryptography by Niels Ferguson and Bruce Schneier. Excited to start reading! Cryptography, for those that don’t know, is essentially (as per the Google definition) the art of writing and solving codes. To put this in a more technical frame, cryptography refers to encryption – the process of converting ordinary information, plaintext, into gibberish, aka ciphertext. Decryption is the reverse process – translating that ciphertext into plaintext. We already have encryption everywhere in our daily lives, such as password protected internet connections, Facebook Messenger’s secret conversation option, and credit card transactions, for example.

I also signed up to volunteer for BSidesSF! That way, I can waive the $50 entrance fee. As a poor student, I can’t quite afford that, but I can volunteer! This will be my first BSides that I’ve attended since getting into security about a year ago.

This year will be the first year I attend a hackathon! I will be attending Fishackathon in February. In the past, I’ve always shied away from hackathons due to me being a noob at computers, and not wanting to make a fool out of myself. Lately, I’ve been trying to take every opportunity life gives me, because… well, why not?

In addition to that hackathon in February, I will be attending BSides SF. BSides is a free, volunteer driven security meetup, usually alongside major security conferences, such as RSA and Black Hat/DEFCON. Unfortunately for me, RSA was too expensive for me, even with the student discount so it looks like I won’t be attending this year. Maybe next year I’ll go!

I am really looking forward to August, which is when I will be going to DEFCON for the second year in a row! DEFCON is a hacker convention hosted in Las Vegas dedicated to hacking.  I didn’t do much last year still being new to security (and I haven’t been to Vegas in a while.) This year, I hope to attend the workshops and try to introduce myself to everyone there. I found people at DEFCON to be very welcoming and friendly, and I am excited to meet more and more people.

One day, I’d like to be able to attend Black Hat. Black Hat is a security conference aimed at professionals (and therefore is expensive – most people who attend Black Hat get their work to pay for it) and is considered one of the leading conferences in computer security. It is hosted every year in Las Vegas, usually a few days before DEFCON starts. The difference between Black Hat and DEFCON is that Black Hat is more of a corporate event, whereas DEFCON is less corporate-y, more informal.

It looks like 2018 will be a very eventful year and I look forward to learning new skills and meeting new people! 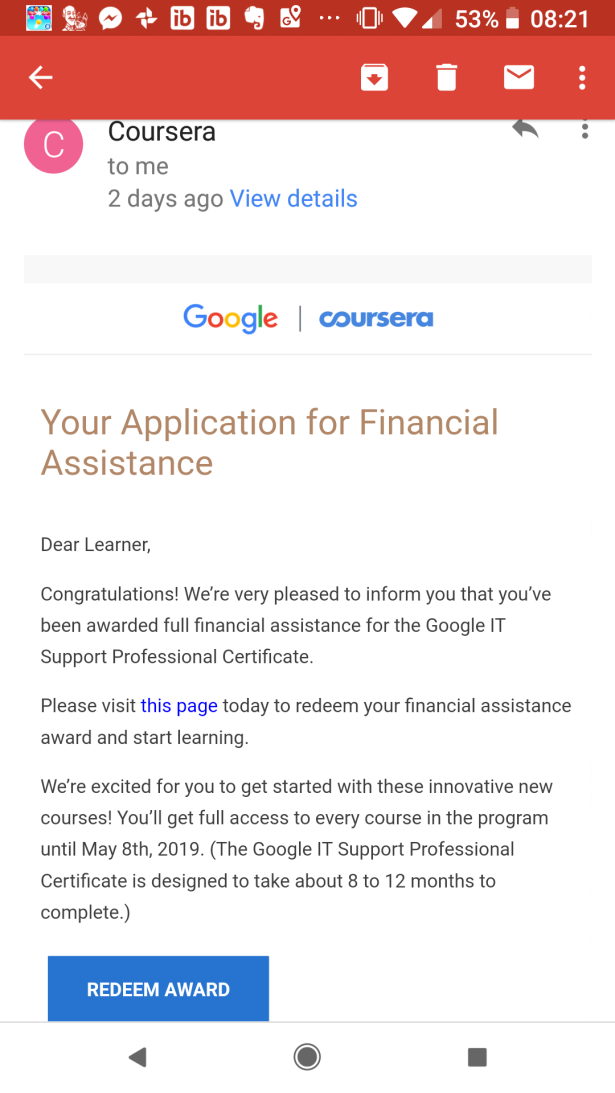 I plan on having this certification done by the time I start fall semester. I am so grateful for a program like this – initially I was considering taking an IT course at CCSF, but decided to hold off on it because I don’t qualify for the ’17-’18 FAFSA (still considered a dependent!)

What is Girl Gone Wired?

Girl Gone Wired is a blog by me to showcase my projects and ramblings about tech and my daily life. I’m lucky to have been born and raised in the Bay Area, close to Silicon Valley where I can indulge myself in anything tech.

Who is behind Girl Gone Wired?

My name is Caitlin, and I will be your captain amongst this journey we call blogging. I am currently a college student studying international relations (I know, completely unrelated to computers), and I want to merge my interests in national security and network security.